The idea for visiting Bratislava showed up in our minds, when we where going with a bus to see Krka river in Croatia. It was one of the last days of our road trip through South-East Europe and we had only Plitvice Lakes to see. From there to Poznan would be over 12 hours ride (not counting stops). We both knew that it would be to tiring. “So where we’ll do a stopover?”. Quick look on the map – “Bratislava – it’s almost halfway between, so let’s stop there.”.

There was a free Wi-Fi in the bus, so quickly (cause it was only few minutes ride) we booked an accommodation, without checking where exactly it is. When we got there, it took as a while to find the right from all the housings. We were welcomed by a young girl and she explained that she’s only a translator, because the owner doesn’t speak English. After filling the forms, landlady welcomed us kindly and said to the girl in Slovak – “Kristinka, poviete im, že, ako chcú, sami čaj a káva môže variť” and Kristinka translated that we can make ourselves tea or coffee in the kitchen. We thanked and asked – “How to get to the center and where to buy tickets?”. She answered – “Autobusová zastávka je tri minúty rovno cez koľaje, a vstupenky mám, takže môžem predať. Stoja dve euro”. Kristinka translated again, that bus stop is 3 minutes from here, passed the railway, and that the lady has tickets and can sell them to us – priced 2 EUR. We started laughing, because in fact we got almost everything right ahead – without translations from Kristinka. (It’s because Polish and Slovak languages are quite similar). All four of us agreed, that our languages are similar enough to try to communicate without Kristinka’s help (with a small assist of hand gestures).

When we were still a far road from Bratislava, we had a good look at intensively illuminated building on top of a hill. It was so hypnotizing, that we agreed – if it’s in Bratislava, it will be definitely the first place that we’ll visit.

Turned out that we’ve seen the Castle Hill, but when we got closer, we couldn’t find a proper route to get there. Finally, we decided to ask someone for help. Dawid approached some people standing on a tram station. The first person was a student, and she gladly offered her help. She even offered that she will show the way. So all three of us started walking towards crowded alleys. We passed by a lot of groups in different age, laughing, having fun, even singing. Also all the bars we’ve seen along the way were so full, that people were gathering outside. The girl explained that it’s totally normal here. Castle Hill and all bars in the area are most popular meeting places for people from Bratislava. Especially students and people who like outdoor parties are gathering here, because there’s a breathtaking panoramic view over the city and there are no fines for drinking alcohol (we’re not sure if that’s true). We were very surprised, but after getting to the hill we regretted that we didn’t take a beer ourselves.

Castle and surroundings are simply majestic. Since it’s very beginning it was many times rebuilt, and depending on the rulers – had different usage. Purely spiritual for antique Romans and Slavic, through stone stronghold for Hungarians, ending with renaissance (later rebuilt in baroque style) catholic school and monastery under Kingdom of Bohemia. Today, it’s a place for Historical Museum, that is a part of National Museum.

Castle is one thing – the other is view at Bratislava from the top of the hill. Illuminated promenade on both sides of Danube. Bridge with a restaurant on top of the pylon. Lively city slightly covered in a soft mist. This hypnotizing view kept us there longer than we expected.

Sightseeing of Bratislava shouldn’t end on Castle Hill. So we took off and went towards the Old Town. We were strolling both crowded main streets and empty alleys through the center. Old Square, Slovak National Theatre or St. Martin’s Cathedral – these are only few of the things worth to see. We especially like monuments created for a project of Bratislava center revitalization. Čumil is probably one of the most known of them. It’s a sculpture of a sewers worker peeking from an open sewer hole and watching pedestrians with a smiley face. Seeing such a face, we just couldn’t pass by without taking a picture. After photo session with the sculpture, despite slight lacking more sightseeing, we had to get back to take a rest. In the morning we had to start a long run back to Poznan. 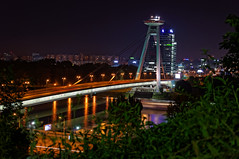 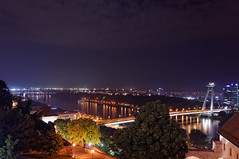 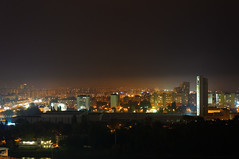 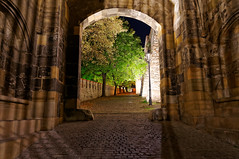 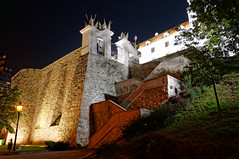 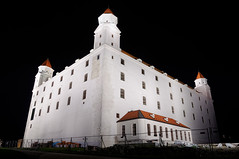 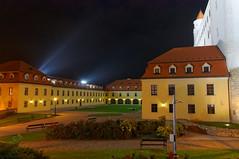 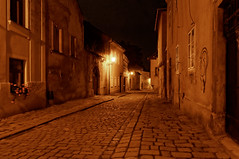 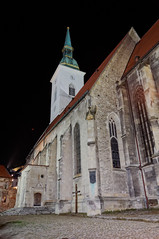 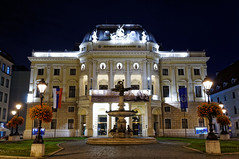 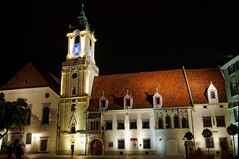 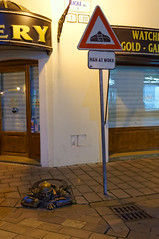 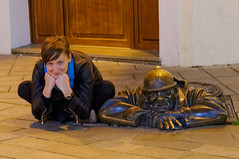